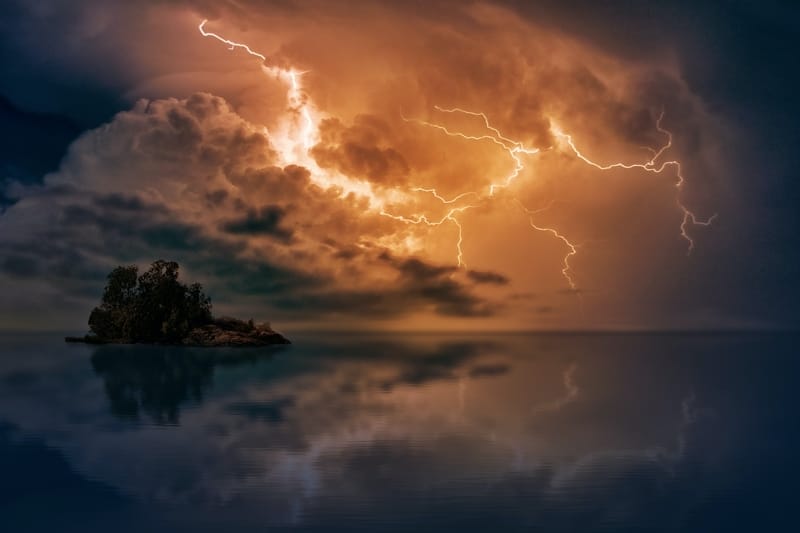 God uses various things to reveal to us about His presence. One common way is through thunder and lightning, which people took as something magnificent in the past. To date, people from different cultures believe that lightning is a manifestation of God in our lives.

Are Lightning Bolts Mentioned in the Bible?

There is frequent mention of lightning in the Bible in various verses. During thunderstorms, the next thing that will most likely happen is lightning. Usually, it can be pretty powerful and may cause disaster in some places.

Lightening in the Bible brings to attention the might presence of God. God shows His power over nature by revealing Himself to human beings through the lightning.

When He appears in the form of lightning, He will make His will known to people and follow that.

One of the most relevant verses mentions the lighting in Exodus 9: 23-24, where Moses stretches his sword towards the sky, and then the Lord sends “thunder and hail”, and fire runs down the earth. There is fire flashing in the middle of severe rain in this case.

Also, in Job 36: 30-33, God spreads His lightning and covers the sea with it. Moreover, Mathew 28: 3 depicts the Lord’s appearance in the form of lightning.

Luke 17:24 says that when the Son of Man appears on His day, He will do so, just like how the lightning flashes out of one part of the sky.

Many other verses in the Bible talk about lightning both directly and indirectly. Each instance holds a unique and special message that God wants to be known to His people. Therefore, it is important to listen to what God wants you to be or do in your life.

The Lightning Bolt Meaning in the Bible

Traditionally, people believed that lightning symbolized the destruction of ignorance in human beings.

Other cultures believe that God uses it to punish His people when they go against His will. There are many meanings that lightning has.

Even though many people believe that they are dangerous or maybe they appear when something evil is done, it may not always be the case. In several instances in the Bible, take lightning as a form of divine intervention or maybe honoring someone chosen by God.

Light in the Bible has always been a symbol of God’s revelation, knowledge, holiness, and hope. It is also a sign of goodness, wisdom, and grace from God. On the other hand, darkness is a sign of evil and sin.

God may use lightning to show people His power. He can command the forces of nature so that they produce lightning at a specific time. Job 37: 3 highlights lightning as God means that He is responsible for it and its creature.

There are various instances in the Bible where God’s presence is in the form of lightning. Therefore if you see it, then it might mean that the spirit of God is around you. Therefore, you need not fear since the grace of God is with you, and it will protect you.

Moreover, lightning reminds you that you need to be respectful to God. He has power over human beings and, more so, over all His creation. Therefore, it is just right to act according to His will and respect what He presents to you.

God uses the lightning to speak about His wrath towards us in other cases. When He is not happy with the actions of human beings, He will unleash His punishments on people. God does this either directly or might punish people using what they own.

In the book of Psalm 78:48, God gives the cattle of people to hails.

For the rest of the livestock, God sent lightning bolts to destroy them.

In most cases, God will protect people and what they own. But due to His wrath, He sends what He knows will destroy the creatures.

The releasing of lightning to people, in this case, is a reminder that God can punish you severely when you go against His will. He does this to serve as a lesson and draw people’s hearts towards Him. When your heart is close to Him, you are sure of His blessing, and He will also lead you to destiny.

Lightning may also mean that human beings are careless towards mother nature. Maybe people are exploiting the resources that God has given them.

Therefore when God sends lightning, He lets the people know that what they are doing is not right. Therefore, it will be important for them to confront the truth of what they do.

Most people take lightning bolts as a sign from God. Also, almost all religions believe that lightning happens since God sends it.

In the past, people would associate lightning because the gods were angry. Therefore in an instance where God sent the lightning, it was always a sign that He was angry with their actions.

Therefore, people would be prompted to ask for forgiveness and, most importantly, leave their sinful ways; otherwise, God would punish them.

Also, lightning is part of God’s creation. So when He unleashes them on us, it is just a sign of how powerful He can be. It shows that God is solely responsible for all the happenings in the world. Lightning should humble human beings before God due to the power of His nature,

People do not take lightning bolts as a big deal in other cases. In as much as God is the creature of nature, scientifically, people associate lightning with static electricity. It occurs due to electrons building up in the clouds, so when they come together, lightning occurs.

While this theory is true to some extent, the process is all powered by nature. And the owner of nature is God; therefore, He is still responsible for the lightning bolts. So, lightning will remain to be a sign from God.

What Does the Lightning Bolt Mean In The Bible?

The lightning bolt has various meanings in the Bible, and there is always a reason why it appears to you. In some cases, it might appear in your dreams, others in reality. There are many cases where God sent lightning bolts to His people.

The first thing people of different cultures think of when they hear about lightning is God’s punishment. This belief has been there for ages now is does not seem to stop. When God sent lightning to His people, He did so as a form of punishment in the Bible.

People on earth also believe that when there is lightning, God is using it to punish them. It means that people have been doing something that is against God’s will. So, to punish for the wrongdoing, God sends the lightning.

Lightning is not a very pleasing event; therefore, people believe that it is a form of punishment when it happens. It tends to scare people away, and people will get deep into their thoughts about their wrongdoing.

In some instances in the Bible, the lightning would wreck everything along the way as a way to punish people.

Lightning in the Bible also shows God’s wrath. Sometimes in your life, you might feel super angry, and this is just a reflection of God’s characteristics in you. God gets angry when you go against His will and when there are a lot of injustices happening in the world.

When God decides to intervene in such cases, he does this by bringing lightning to the people. In the book of Psalm 144:5-6, God intervenes where his enemies are present. He uses lightning to scatter His enemies since they are not doing what is right.

Lightning in the Bible also means that God has a certain power that He uses to do away with the sinners. Lightning is not something that occurs out of the blues. It is among God’s creations, and the forces of nature make it come to be.

Also, it shows that as a human being, you have the power and energy to do even what you think is impossible. It shows that you need to look deeper into yourself and release your potential and capability.

If there are things you feel unconfident about, then it is time you realize that you are capable of doing them.

As a normal human being, you cannot just predict that lightning will happen at a particular time.

Once you see thunderstorms, you automatically know that what follows is lightning—in such a case, seeing lightning might equate to a person experiencing a shocking event in the future.

Lightning in the Bible is known to cause a disaster. Therefore, if it appears you need to brace yourself for something bad happening. What follows after lightning may not necessarily be bad, but it is important to be ready for whatever happens.

In the Bible, God would invoke lightning to people when they were too ignorant. God would do this as a wake-up call for people to rectify their ways. Also, it would serve as an alert for lazy people to do what is supposed to them.

Therefore, lightning connects to the loss of ignorance that people in the past had. It would serve as a reminder for people to change so that God does not become angry. Failure to change God would strike people with the lightning.

Several verses in the Bible talk about lightning as one of the end-time signs. The disciples kept questioning Jesus about how the end will be and when it will happen. Jesus, on the other hand, did not give them a straightforward answer.

He would respond to such questions using symbols and signs, and one of these signs is lightning. In Mathew, it says that when one sees lightning coming from the east or west, it means that the Son of Man is also coming.

God judges people of the world in various ways. People on earth await great judgment when the world comes to an end but do not know exactly how God will do it. In the Bible, God uses lightning as one of the tools to judge people.

When He sends lightning and commands it were to strike, it may signify that the area or people around have been going against His will.

For this reason, people need to get ready and repent their sins before this day.

When you see lightning, then you are sure that thunder is coming. Lightning bolts are often a sign of danger and destruction that is about to happen. God uses it to punish those who are going against His will and will also send it out when he is angry.

It is one of the instruments that God will use during judgment day. So when he commands it to strike a certain place, it will destroy it. Therefore, it shows His wrath about his people and is not a good sign. In many cases, it acts as a warning to people who are not doing what is right.

God will use lightning as his weapon against his enemies. The enemies, in this case, are those going against his will. Lightning reminds you that God is perfect and, above all, super powerful.

Lightning bolts are warning signs about how God feels regarding how people are living life. It reminds you that you need to be firm in your faith and repent since you do not know the day or the hour when Jesus will come.

As much as you are uncertain, you should know that this time will happen as fast as lightning.

So, do you already know what does the lightning bolt mean in the Bible and for God? Please, feel free to use the comments below to leave your opinion.